The fund is named after Robert McGregor (1940-2015). Robert was a founding member of the Art Deco Trust, the Trust’s first President and its first Executive Director (from 1992, when the Trust became a professional organisation). He was a passionate advocate of Napier, Hawke’s Bay and our unique art deco architecture and heritage.

Two of Napier’s beautiful Art Deco buildings have become the first recipients of the Robert McGregor Heritage Fund in support of a spruce up of their facades.

The second recipient is the Hilderbrandts building, a 1933 Louis Hay design which is a favourite on the regular walking tours of the city because of its interesting facade.

Second Round of Heritage Fund


June 2018 marked the second round of the Robert McGregor Heritage Fund since its launch in November last year. We are delighted to announce and show off the four recipients of the June funding round.

The Daily Telegraph Building is an iconic landmark on Tennyson street and it has been given new life thanks to a new coat of paint. The Canning and Loudoun building just down the road has also received some much needed TLC. The CB Hansen Building has had a major spruce up both inside and out. Finally the Sainsbury Logan building has received some support to help with some critical preservation work to their Art Deco skylight, a favourite feature for our visitors who get to view this building on our daily tours. 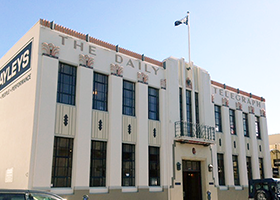 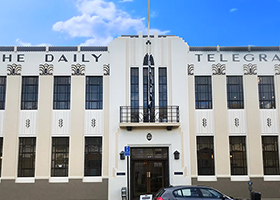 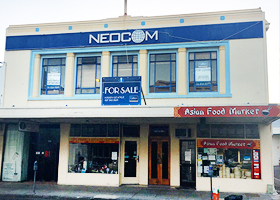 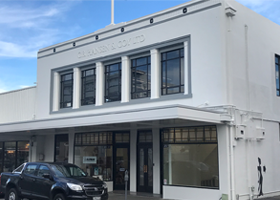 Three Napier buildings will receive funds from the Robert McGregor Heritage Fund in support of a spruce up of their facades.

The former Bank of New South Wales (Crichton McKay & Haughton 1933) building on Hastings Street is receiving an overhaul inside and out with new owners bringing it back to its former glory. Owner, Carol Howard says “We are delighted to receive this grant which will assist with the painting of the façade, this will really bring together all the hard work completed over the past few months during the renovation and really bring the building back to life”.

The second recipient is the CD Cox’s building on Dalton Street where owners Greg and Wendy Nowell Usticke are converting the spacious middle floors into 2 smart Art Deco Apartments. This is a labour of love for Greg and Wendy and the funding will assist with the façade painting back to its original colours.

Finally, The Golden Crown building on Dickens Street is getting an overhaul by Wallace Development with a new restaurant tenanting the ground floor and a renovation of the first floor apartment and earthquake strengthening. Funds awarded will again assist the painting of the façade.


A further three Napier buildings will receive funds from the Robert McGregor Heritage Fund in support of a spruce up of their facades.

The second grant is for the Former Robert Holt building, a prominent Spanish Mission building on the corner of Hastings and Tennyson Street, with new tenants, The Dentists, they are embarking on a full repaint bringing it back to its former glory.

The final grant this funding round was given to The Masonic Hotel, (1932) for restoration of the canopies on the corner of Tennyson and Hastings Street.  Owners Craig Hay and Neil Barber plan to install original style detailing to the canopy’s, also giving them a paint.   Craig says “we are grateful to the Art Deco Trust and Robert McGregor Heritage Fund for the funding allowing us to bring the canopies back to their original form, it is important to us to ensure we restore features of the building in keeping with the Art Deco style”.